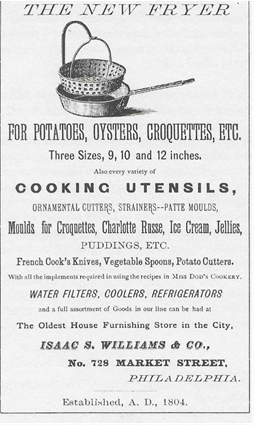 Croquettes are little nuggets of ground meat or vegetables bound with eggs or a sauce, coated in breadcrumbs and then fried until golden and crunchy on the outside. The name comes from their deliciously crispy exterior; croquette is derived from the French verb croquer, or crunch. These flavorful delicacies were very popular in the 19th century, found throughout cookbooks from the era and at large catered events such as weddings and receptions.

According to food historians, croquette-type dishes likely evolved from Ancient Roman rissoles: minced, spiced meat bound with fillers, carefully shaped, and deep fried. Over the years, recipes have varied depending on regional culture, cuisine, and period. The main difference between rissoles and croquettes is the former is wrapped in pastry while the latter is rolled in breadcrumbs. But they are basically interchangeable in the way they are cooked, presented and served. Although references to “Croquettes” appear in print in the early 18th century, the earliest recipes found in English/American cookbooks date to the early 19th century.

There is a vast range of potential ingredients for croquettes — meat, rice, cheese, fish, pasta and vegetables have all been enjoyed in croquette form. And while chicken was the preferred type in the 1800s, mashed potato is the most common croquette filling today. Potato croquettes are sometimes called potato balls. When the croquettes are shaped flat, they are also called “a la duchesse.” 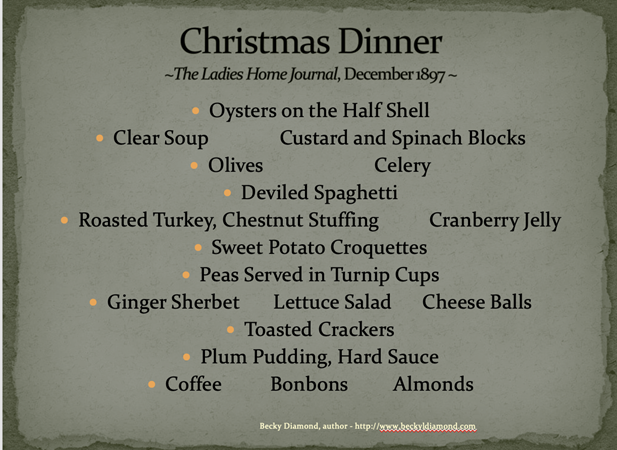 As seen on the 1897 menu from Ladies Home Journal, sweet potato croquettes had a spot on the Christmas dinner menu.

I followed the chicken croquette recipe of Philadelphia black caterer, Peter Augustine. Augustine came from the West Indies, learned the catering trade from Robert Bogle (who was also a black caterer), and established his business in Philadelphia in 1816. Philadelphia was an unofficial center for black caterers, including James Prosser, Henry Minton and Germantown’s John Trower, who featured chicken croquettes at many weddings and receptions, such as one given at the Elks lodge room on the 3rd floor of the Academy of Music Building in 1896 and another in Washington, D.C. hosted by Postmaster General John Wanamaker (of the Philadelphia department store fame), considered one of the most elaborate that had ever been given at that time. Like his equally successful contemporaries, Augustine created a catering empire when opportunities for blacks were extremely limited. He became very wealthy and created employment opportunities for the black community. He trained wait staff and other crew in the production of food events. Augustine also provided china, tablecloths, tables, chairs, and other catering equipment he rented to his clients for their events.

Although this dish is suitable as either an appetizer or main dish and would be a perfect addition for a holiday table, it would shine at a casual event as well. The most important thing for this recipe is to mince the chicken very fine (I use my food processor), or to use mashed vegetables if doing that way. Next, the filling is soaked in a white sauce. For some reason, the white sauce in the Augustine recipe says to boil the milk first (then add flour and butter), whereas usually it is the other way around. Feel free to do whatever you prefer, but I’m giving instructions for doing the typical way. 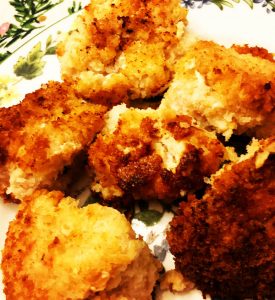 Put into a saucepan 1 ½ pts. of milk or cream, when hot stir into it, ¼ lb. of butter and 2 tablespoons of flour, rubbed together and well mixed with some of the milk, ¼ of an onion chopped fine, boil until it thickens, then stir in the chicken, which has been chopped very fine, and well-seasoned with salt, cayenne and mace – mix well – cool the mixture, form into shapes, roll in crumbs, and yolk of an egg, and fry. A chicken weighing 5 ½ pounds will make 12 croquettes.

And here is the adapted version, which I made based on the version found in 35 Receipts from The Larder Invaded by Philadelphia food historian William Woys Weaver. Mace should be available in the spice section of most grocery stores, but if you can’t find it, feel free to use nutmeg instead. Also, feel free to substitute broth for part of the milk or cream. Lastly, I found that chilling the mixture after mixing with the white sauce and seasonings is essential in allowing the mixture to come together better.  Do not skip this step!